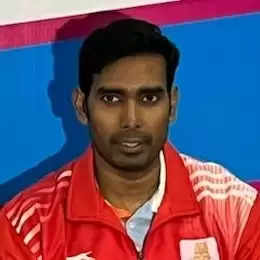 Star Indian paddler Achanta Sharath Kamal has become the first player from the country to get elected to the Athletes' Commission of the International Table Tennis Federation (ITTF).

New Delhi, (IANS) Star Indian paddler Achanta Sharath Kamal has become the first player from the country to get elected to the Athletes' Commission of the International Table Tennis Federation (ITTF).

Sharath got 187 votes, the second-highest number, behind Elizabeta Samara of Romania, who received 212 votes, the difference of a mere 8.83 per cent votes polled from their continents -- Asia and Europe -- respectively.

Eight athletes (four male and as many female) were elected from Asia, Africa, the Americas, Europe, and Oceania and will serve in the Athletes' Commission for four years from 2022 to 2026.

Talking of international honour, the 40-year old India -- a multiple Commonwealth Games medallist -- felt humbled and happy to know that he got the highest number of votes from Asia, ahead of other candidates from the continent. Liu Shiwen, elected from the female quota, is the other Asian on the Commission, but the Chinese managed only 153 votes.

"I am bowled over and humbled by the recognition. I thank the whole of Asia and all the voters for showering such affection with faith and the CoA (Committee of Administrators) for recommending my name to ITTF," said Sharath in a release issued by Table Tennis Federation of India (TTFI) on Wednesday.

The Indian, whose popularity transcends borders, could also become the vice-chairman of the ITTF's Athletes' Commission if the Asian Table Tennis Union (ATTU) decides to push his case.

Sharath, who will be receiving the Major Dhyan Chand Khel Ratna Award -- the highest National sports recognition of the country -- from President Droupadi Murmu later this month, is also the vice-chairman of the Athletes' Commission of the Indian Olympic Association (IOA).

The veteran is one of the ten eminent athletes elected a couple of days ago to the National Olympic body that goes to the polls next month.

In the November 7 to 13 polling, 283 athletes voted to elect eight candidates from different regions, indicating an increase of 18 per cent, compared to 240 in 2018, and the growing popularity and relevance of the Commission. Besides the eight athletes, two para-athletes will also serve the four-year term.