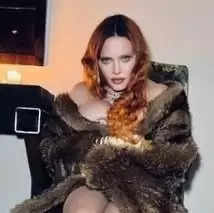 Making use of her Instagram account on Monday, November 21, the "Vogue" songstress posted a very sexy video with a caption that read: "I'm in the mood for love." In the clip, the Queen of Pop wore a nude corset, matching underwear, a brown fur coat, classic fishnet stockings and gold heels, reports aceshowbiz.com.

The footage saw Madonna covering herself with bottles of wine before she showed off her legs in gold heels. The star, who sported colored contact lenses and red hair, revealed her taut visage as she lay across an oak table adorned with candles before the video quickly took a risque turn.

Madonna was later seen cupping her breast before striking a raunchy pose in the final frame and exposing her nipple. She added a track from Miles Davis' 1958 album, "Ascenseur Pour L'echafaud", to the video.

The post will have been in breach of Instagram's strict no-nudity policy, which previously restricted Madonna to go Live. Expressing her disappointment, the mother-of-six slammed the social media platform in May, "Guys we're gonna go Live. What the f***? We're blocked from Live? Ew, what's happening? I've never worn so many clothes in my life. I'm speechless!"

Back in November 2021, the 'Papa Don't Preach' songstress defiantly reposted images of herself posing suggestively on a bed after Instagram had taken them down "without warning" and was "astounded" that they had been removed because her nipple was on show.