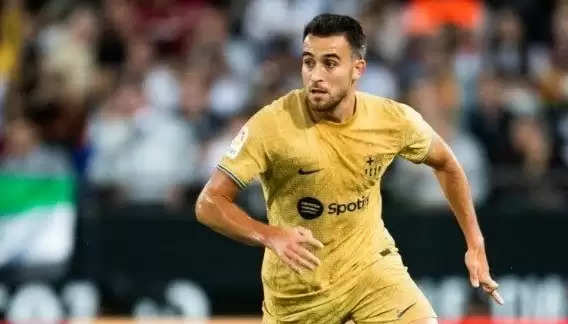 Saturday was a worrying day for Spain coach Luis Enrique as he saw two players who are in his squad for the FIFA World Cup leave their games through injury.

Madrid, (IANS) Saturday was a worrying day for Spain coach Luis Enrique as he saw two players who are in his squad for the FIFA World Cup leave their games through injury.

FC Barcelona defender Eric Garcia and Atletico Madrid striker Alvaro Morata both suffered injuries with just 12 days before Enrique is due to name his 26-man squad for the Qatar World Cup.

Garcia was forced off with a groin injury before the end of the first half of Barca's 1-0 win away to Valencia, and was replaced by Marcos Alonso, reports Xinhua.

Robert Lewandowski's 93rd minute goal decided the game which had looked set to end in a draw.

Morata also limped off with an ankle injury after just nine minutes of Atletico Madrid's dramatic 3-2 defeat in Cadiz.

Theo Bongonda's goal after less than 30 seconds, had already put Cadiz in front by the time Morata suffered the injury and Cadiz doubled their lead in the 81st minute through Alex Fernandez.

It looked like Joao Felix had salvaged Atletico a point from two goals down, with a stunning impact off the bench, forcing an own goal in the 85th minute and scoring another effort himself in the 89th minute.

But Atletico were caught by a sucker punch as Ruben Sobrino turned in a cross at the other end with the last action of the match.

Alvaro Garcia scored the only goal of the game to give Rayo Vallecano a 1-0 win away to Sevilla.

Alvaro beat two defenders and fired into the bottom corner just after the hour to lift Rayo up to eighth against a rival that has hardly improved since the arrival of Jorge Sampaoli as coach.

Almeria came back from a goal down to win 3-1 at home to Celta, who took a 25th minute lead through Gabri Veiga. Veiga then ruined his and his side's afternoon when he was sent off for a second yellow card minutes later and Almeria made their superiority count in the second half with three goals.