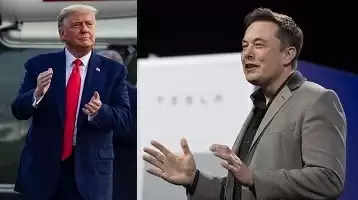 Based on a poll, Twitter CEO Elon Musk on Sunday announced that former US President Donald Trump has been allowed to rejoin the micro-blogging platform.

San Francisco, (IANS) Based on a poll, Twitter CEO Elon Musk on Sunday announced that former US President Donald Trump has been allowed to rejoin the micro-blogging platform.

Musk tweeted: "The people have spoken. Trump will be reinstated."

"Vox Populi, Vox Dei", he added, which means "the voice of the people is the voice of God".

Several users expressed their thoughts on Musk's decision. A user asked: "Not saying I'm against this decision, but what happened to no major account reinstatements before the council convenes?"

While, another user commented: "I thought you said something like this would be done by a special committee not a poll."

Musk on Saturday kicked off the poll to find out how many of his over 117 million followers support or reject the move to reinstate Trump on the platform.

The new Twitter CEO said that the poll was getting a massive 1 million votes per hour.

"Fascinating to watch the Twitter Trump poll. The bot attack is impressive to watch," tweeted Musk.