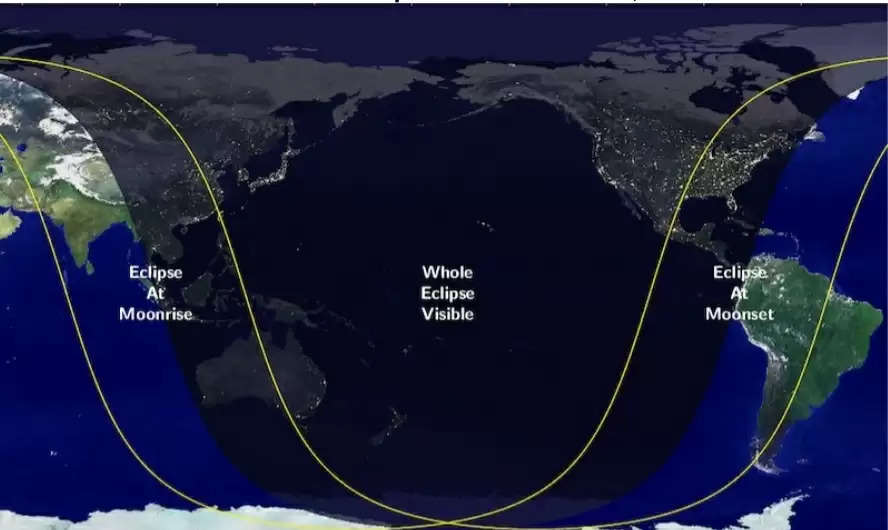 On the evening of November 8, as the Earth's shadow envelopes its sole satellite for nearly one-and-half hours, the world will witness a thrilling and chilling spectacle of a 'Blood Moon' lunar eclipse, a prominent astronomer said here on Monday.

Mumbai, (IANS) On the evening of November 8, as the Earth's shadow envelopes its sole satellite for nearly one-and-half hours, the world will witness a thrilling and chilling spectacle of a 'Blood Moon' lunar eclipse, a prominent astronomer said here on Monday.

Coming exactly 14 days (two Tuesdays) after the October 25 partial solar eclipse -- the lunar eclipse will be seen in totality in the northeastern states, but shall be only partially visible in the rest of India in the evening as the sun sets, said Prof. Bharat Adur, Director, Akash Ganga Centre for Astronomy (AGCA) here.

"Tomorrow, the Earth's looming shadow will cover the Moon and during this period it will appear a dark reddish colour, almost like a large drop of blood balanced in the sky... This phenomenon is called a 'Blood Moon' and it's an exciting spectacle," said Prof. Adur.

The Earth will come between the Sun and Moon and the blue planet's monstrous shadow -- from a staggering distance of 3.93 lakh kms -- will shroud its small natural satellite, partially or fully, depending on the angle of alignment from where it is viewed, Prof. Adur explained.

The Sun is around 109 times bigger than Earth and over 148-million kms away, while the Earth is nearly four times larger than the Moon, with an average distance of 3,85 lakh kms separating them.

"In a total lunar eclipse, the Moon is entirely blanketed by the Earth's darkest shadow, called the 'umbra', and at this time, the Moon appears a dark-reddish colour, or what is called the 'Blood Moon' phenomenon," Prof. Adur said.

In scientific terms, it's called the 'Rayleigh Scattering' as during a lunar eclipse the only sunlight that reaches the Moon passes through the Earth's atmosphere, thus turning the Moon an apparent reddish colour.

This is the second celestial event since the last partial Solar Eclipse (October 25), and can be witnessed by people in India, Pakistan, Afghanistan, parts of Asia, Russia, North and South Americas, Australia, North Atlantic Ocean and Pacific Ocean regions.

Despite the scary myths or deep religious aspects associated with any eclipse (solar/lunar), Prof. Adur assured that there is absolutely no harm in viewing the unusual 'Blood Moon' on Tuesday with naked eyes or with binoculars which will enhance the reddish colour.

The northeastern parts of India like Kohima, Agartala, Guwahati and other regions in the world will witness it in totality on Tuesday, the final eclipse of 2022.

As the Moon will be below the horizon during the eclipse hours, most other parts of India will miss the exciting starting phases of both the partial and total eclipse, he said.

Kolkata, New Delhi, Chennai along with Mumbai, can witness only the partial phase, and in the country's commercial capital barely 14 per cent of the Moon's obscuration can be viewed at 18.03 hours in the setting sun.

However, the Moon will be seen 60 per cent covered in Nagpur, 66 per cent in Srinagar and in varying degrees in other cities, said Prof. Adur.

In case people miss the 'Blood Moon' on Tuesday, they can wait for October 28, 2023, when there will be another partial lunar eclipse that will be visible in some parts of the country, Prof. Adur smiled.

(Quaid Najmi can be contacted at: q.najmi@ians.in)