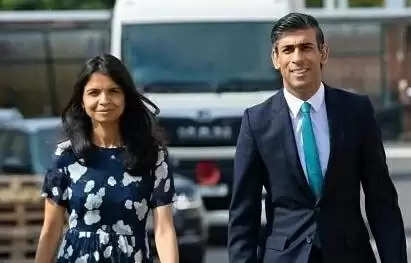 The extraordinary wealth of the wider family of Britain's super-rich Prime Minister Rishi Sunak and his billionaire heiress wife Akshata Murthy has been laid bare, the media reported.

London, (IANS) The extraordinary wealth of the wider family of Britain's super-rich Prime Minister Rishi Sunak and his billionaire heiress wife Akshata Murthy has been laid bare, the media reported.

With an estimated net fortune of 730 million pounds that includes multiple properties in Britain and the US, a string of business interests and even a fleet of cars including a 'high-spec' Range Rover, a 'top-of-the-range' Lexus and a BMW, the Oxbridge former Goldman Sachs banker and his Stanford-educated spouse are by far the wealthiest occupants of Downing Street in the history, the Daily Mail reported.

Indeed, Akshata Murthy is said to be wealthier than even King Charles III due to her 430 million pounds stake in her billionaire tycoon father Narayana Murthy's IT empire.

She has also continued to hold stakes in businesses over the years including a joint venture with Amazon, Cloudtail, in India worth 900 million pounds a year, a project she and Rishi set up together, Catamaran Ventures UK, shares in the firm which runs Jamie Oliver's Pizzeria and burger chain Wendy's in India, and Etonian tailor New & Lingwood, which makes pupils' tailcoats costing 2,500 pounds each, Daily Mail reported.

Rishi's father-in-law, dubbed 'India's Bill Gates' due to his role pioneering the country's tech boom, was recently ranked the sixth richest person in India and the 654th in the world after his remarkable success in founding Bengaluru-based IT firm Infosys in the 1980s, now a 9.6 billion pounds multinational that employs more than 3,45,000 people.